Hello everyone. My name is Hoon Kim, a member of Team STEP. We are a group of aspiring indie game developers who want to learn more about working as a team and hopefully kickstart our career and become a full-time indie game studio. We are looking for team members to work with on this simple project called Witch One (working title). But considering that over 90% of indie game studios die within a year or never see the light of day, I'll pitch this as a learning experience that has the potential for a rev-share (if finished) to keep things real.

Witch One is a simple 30 player 2D top-down perspective battle-royal game set in a medieval fantasy world with sorceresses and witches from different cultures that gather together. Everything about this game emphasizes stealth rather than action, which is different from other popular games in the same genre. Each stage is designed to last about 20-50 minutes. The objective of the game is to be the last player standing against all kinds of odds that other players throw at you.

The core gameplay will be about the player moving around a huge map with their sense as the only thing to depend on. Each movement the player makes will generate a sound and a ripple effect to visualize the sound to the other players. The environment will have different surface types that can create different sounds or leave a footprint that will stay until that player is out of the game. There will be other throwable objects like rocks, inflatable bouncing toads, torches, trap runes, etc. scattered throughout the map with different effects to aid the player. These throwable objects will generate a sound on its landing point that is exactly the same as the player's movement sound, giving it the illusion that the player is there. The trap runes are a placable trap object that will explode when another player (or a throwable object) gets near. Players can choose from a set of player classes such as a pyromancer, necromancer, etc and these classes will change the side effect of those trap runes unique to the player's choice of character class. Other game features stay consistent. Making this a game of tactical tag with skill and strategy as the players are expected to either run away and hide in certain situations, or bait other players and try to catch them when they find the perfect opportunity. The player character classes will look something like this 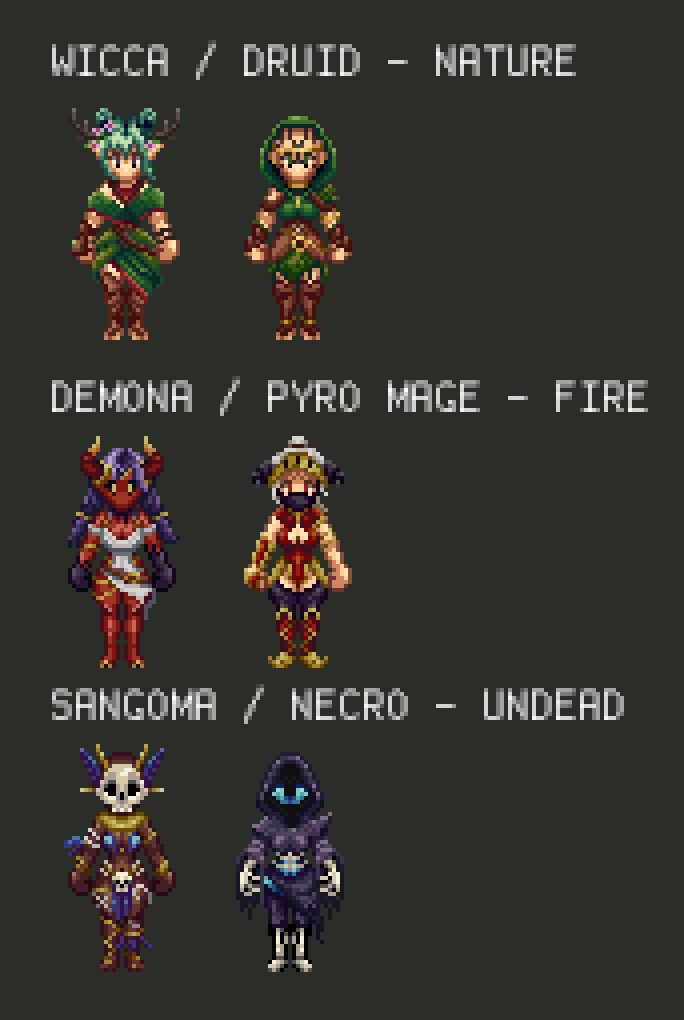 (made by one of our artists). For further details, please consult the design docs at the end of this post.

We need a pixel artist who can adapt our existing style and create character + animations and work on item/props for the project. The sprites are 16 ~ 32 px square large (a single tile is 32x32). Character sprites are 8-directional with animation for each state (walking, running, throwing, etc.)

We understand that this is not a small task and that is why we want someone with enough dedication for this project to join us and be part of the team to make this game into a reality. Of course, if the task gets too tough, we will be slim lining our vision.

Having said that, the main goal for this project is to learn, practice, populate our resume, and most importantly, have fun. So the team would like anyone who has around 6 months of experience in the aforementioned area and people who are willing to learn as they go. The only consequence for quitting the project mid-way is losing the right for a revenue share after the game launches, nothing else. We would like a member who will contribute to the project for at least 4 weeks or create at least 3 usable assets (which includes animations and all 8 directions of a single state/character) before considering leaving the team.

All the members of Team STEP have either a day job or other real-life responsibilities that they have to attend to. The only thing that moves us towards the finish line is the passion for this project to be finished.

We expect around 2 hours a day, or one feature a week. Of course, we don't really have an attendance system so the workload is totally up to you, but please make sure to keep the team updated frequently including extending deadlines or making changes to your tasks.

Tasks are distributed on a weekly basis during our weekend team meeting while the task details and adjustments are made within the department.

The Team and our Working Environment

We are a diverse team that gathered together on the interest of making this project happen. You can see the current team members involved from this page (updated regularly). Our team is comprised of people starting from developers who are new to this industry to people with experience working as a professional.

Witch One is developed using Unity 2019.4.8f1 and it will stay that will until the game is finished (assuming there's no breaking bug in the engine itself). Version control is done with Git and the project is managed from Github for developers. Game assets or other files will be stored on Google Drive share folder. Artists will generally upload their work there.

Communication is done via Slack and weekly meetings are done via Google Meet. Currently, the team has an Art department, Programming department, and the game design department. New members will mostly communicate with the department leads regarding the task detail and such.

This will be a simple revenue split project, every revenue that was made directly from this game will be split amongst the members who stick with the development till the end.

In terms of any development costs such as server fee, unity assets (if required) and domain fee will be paid from my own pocket. No one will need to spend a dime on this project.

If you're interested in developing this project, please contact me from Discord (Hoon Kim#1643) or email (info@teamstep.io).